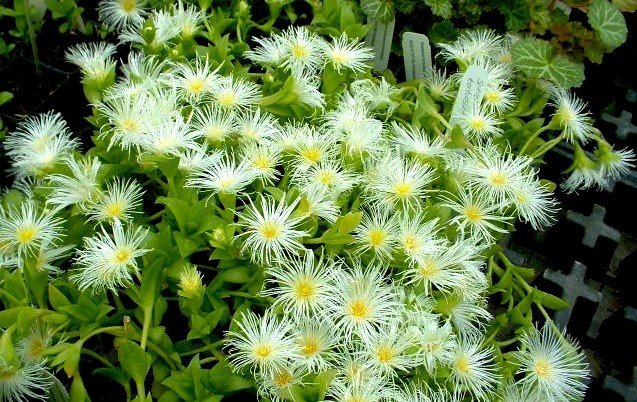 I have a pinch of Kanna under my tongue as I write this. It is truly a remarkable herb! The feeling of well-being I get from a single dose (which for me is a small pinch held under the tongue for a few minutes) is unlike anything I have experienced before and often lasts for days.   It seems the more I use it the less I need it, as I think it is affecting lasting change in my body. Undoubtedly, the spirit of your Kanna is strong!

(Jess, USA, From Message Board)

Sceletium Tortuosum (also called Kanna) is a small groundcover plant native to Southern Africa, which grows only in the Cape region. For hundreds of years the Hottentots of Southern Africa used Sceletium Tortuosum as a mood enhancer, relaxant and empathogen. It is also known as Kanna/Canna and the South African name is Kauwgoed or Kougoed.   Historically Sceletium Tortuosum was eaten/ chewed, smoked or used as snuff producing euphoria and alertness which gently fades into relaxation. If chewed in sufficient quantity, Sceletium has a mild anesthetic effect in the mouth, much like kava. A tea made from Sceletium is sometimes used to wean alcoholics off alcohol.   Although the plant has been used for thousands of years in Africa, it is only now being sought by the Western world for its remarkable capacities to uplift the mood, increase energy levels and concentration spans. Sceletium is also being used as a natural anti-depressant that is safer than the pharmaceutical alternatives.   Sceletium (Kanna) is used to re-balance the brain and nervous system and thereby relieve symptoms of depression. Combined with other well known herbs, sceletium has been proven to be extremely effective and safe.

The mood-elevating action of Kanna is caused by a number of alkaloids including mesembrine, mesembrenol and tortuosamine which interact with the brain’s dopamine and serotonin receptors. Sceletium also contains many nutrients, including minerals and amino acids.   According to laboratory studies sponsored by the National Institute of Mental Health near Washington DC, its major alkaloid, Mesembrine, a PDE4 inhibitor, promotes serotonin levels.   It also appears to have a harmonizing and balancing effect on the other feel-good neurotransmitters, dopamine and noradrenalin, as well as on adrenalin.

Mesembrine works in the following manner: the brain is made up of countless neurons, which transmit signals to each other only by jumping the “gap” (synapse) to neighboring neurons. However, the signal cannot jump the synapse without assistance. The message can only travel when the neuron releases a neurotransmitter to fill this gap and allow the signal to transient via it. The receiving neuron has many points on its surface that which act as potential locks, each of which is known as a receptor and is affected by a particular type of neurotransmitter. When sufficient amounts of the neurotransmitter are received by the relevant receptor, a nerve impulse is started and the message continues to its ultimate destination.

To permit recovery of the neuron to receive new messages, the brain takes away the neurotransmitter from the neuron receptors and permitting it to be sent back to the originating nerves, a process known as re-uptake. In individuals suffering from depression, the neurotransmitter serotonin (also known as 5-hydroxytryptamine) is lacking. Mesembrine slows down the re-uptake process, making it more probable there will be more serotonin in the relevant receptors, greatly increasing the possibility that there will be sufficient levels to set up the signal transfer in all neighboring neurons. Mesembrine allows the brain to function with reduced levels of serotonin, allowing time for natural levels to build up, whereupon the mesembrine dosage can be reduced or eliminated.

Based on biologic mechanism, described above, Kanna has been effective in treating depression, anxiety, and even psychosis. Unlike many similar drugs and supplements, it acts quickly and acutely. It can be used on an as-needed basis, to treat sudden episodes of depression or anxiety, and its effects last for between two and twenty-four hours. Kanna may be the best option for people who experience depression in episodes, rather than chronically.

An effective dose is 50mg a day, although some doctors report needing to use 100 to 200mg a day for those with chronic depression or anxiety. Some experts advise that the easiest method to dose the herb is simply adding a 1/3rd of a level teaspoon into a cup of tea. Note that Kanna should always be taken on an empty stomach when used orally.

In addition to containing natural PDE4 inhibitors, Kanna may contain compounds that interfere with the uptake of serotonin. For this reason, people taking pharmaceutical SSRI-class antidepressants should avoid Kanna to prevent the possibility of serotonin syndrome, a dangerous and life-threatening condition. It is also possible that Kanna can cause other negative interactions when it is taken with other medicines or supplements.   So, people taking any psychiatric drug (including all anti-anxiety drugs, sedatives, hypnotics, antidepressants and anti-psychotics and so-called designer or recreational drugs) or any cardiac medications, should not to take Sceletium-containing products.

Kanna also has not been studied for use in pregnancy or during lactation, and there is little peer-reviewed data about its side effects. We do recommend abstaining from using Kanna at time of pregnancy or lactation due to the lack of proper research.   Other herbs and supplements may enhance Kanna’s effectiveness with little risk of interaction. Some users have combined Kanna with valerian as a holistic treatment for insomnia. This combination leads to deep, refreshing sleep and pleasant dreams.

Kanna has also been combined with fish oil to enhance its nootropic and antidepressant effects, and it appears to increase the effectiveness of stimulants like caffeine and theobromine (found in chocolate) while preventing the “jitters”. L-theanine, an amino acid found in herbal tea, creates a meditative state similar to Kanna, and the two may work in synergy.

Kanna will not produce any major side effects, but some individuals will experience drowsiness, thus it must not be taken before operating any type of vehicle or machinery.

There were some reports that Kanna produces a serious hallucinogenic effect, however, digging through multiple user reports, I have to admit that that was not substantially confirmed by mainstream users. However, most users found that the Kanna induced a significant anxiolytic effect. One informant used approximately 5 ml of powdered substance orally before giving a lecture that he was anxious about. He reported feeling relaxed throughout the lecture, with no cognitive impairment.   Many users felt that Kanna, in addition to alcohol or on its own, enhanced social intercourse at parties and functions. Users felt considerably less inhibited and self-conscious, and more open than usual in conversation with strangers. One user claimed that she felt that Kanna was a “truth drug”. Some users felt that there was a synergistic effect with alcohol, and with smoked Marijuana.

One experimenter, a poly-substance abuser, used Kanna in addition to alcohol (whisky) and smoked Cannabis. He experienced really “bad trip” – a traumatic flashback to a violent event he had participated in during a regional armed conflict. Another experimenter, who on two separate occasions smoked Cannabis after chewing Kanna, reported seeing distinct visions of the Sceletium flower and was able to accurately describe its form and color, without ever having seen a specimen of it.

In multiple occasions, it was reported that chewing of Kanna was reported to greatly enhance the psycho activity of an inferior grade of Cannabis smoked shortly thereafter. A poly-substance abuser addicted to nicotine and a frequent abuser of alcohol and Cannabis, reported that after using a single dose of Kanna, he had felt no craving for alcohol, tobacco or Cannabis for 4 days. Some reported euphoria as well as a feeling of meditative tranquility. Several users felt that the relaxation induced by Kanna enabled one to focus on inner thoughts and feelings, if one wished, or to concentrate on the beauty of nature.

Some informants reported heightened sensation of skin to fine touch, as well as sexual arousal. A senior traditional African healer, not previously exposed to Kanna, tried it and announced that it ‘relaxes the mind’ and one’s body feels ‘light’ the following day. A white Namaqualand farmer, who has observed his shepherds and laborers using Kanna, points out that it is not possible to discern that they are intoxicated with it: they walk normally and work as usual. The only sign that they have been using Kanna, he says, is “a sort of faraway look in their eyes”. One of the researchers, Rood, provided a number of anecdotes on Kanna consumption effects. A Mr. P. van Breda of Worcester reported that if enough is eaten, it anaesthetised the lower jaw sufficiently to enable a tooth to be extracted painlessly.

Mrs. Helena Marincowitz of Prins Albert reported that San mothers used to simply chew the root and spit the juice into the mouth of an infant, who would then sleep soundly for a few hours. Mrs. Lettie van Niekerk of Karnieskroon reported that it is an excellent carminative for stomach ailments and winds. Mr. J.H. Cornelissen stated that Blacks from Queenstown and Khoisan from Namaqualand use an infusion of the leaves of Sceletium tortuosum to relieve pain and alleviate hunger.

Researchers concluded that from the evidence presented Kanna shows no hallucinogenic properties, but rather are narcotic-anxiolytic capabilities. However, its powerful synergistic interaction with other substances, like Cannabis or Alcohol, indicates a serious need for thorough pharmacological investigations.   So, it is confirmed that in moderate doses, Kanna does not impair a person’s judgment or mental focus– it is actually reputed to enhance brain function. Because Kanna can help to decrease symptoms of anxiety and enable emotional insight, some herbalists are concerned that it could develop a reputation as a recreational drug. However, unlike recreational drugs, Kanna is not believed to result in addiction, impaired judgment, or sedation. Even in large amounts, Kanna is not hallucinogenic or otherwise intoxicating.

Previous article
What is an Entheogen
Next article
Differences between white/yellow/black/red caapi?