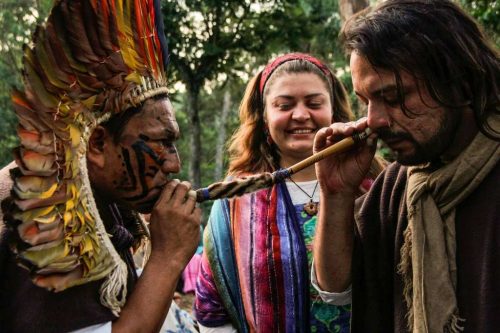 All our rapé products are original, made by indigenous people from the many different tribes described below, and are sustainably produced by the tribes with the wisdom of their shamans.
Indigenous tribe Yawanawa :

– Tsunu : The traditional Yawanawa recipe, a good trong natural Tobacco with Tsunu ashes. A wonderful medicine for all occasions. Well blended, simple, strong and to the point.

– Mulateiro : Nowadays the Yawanawa sometimes use the ashes of the mulateiro tree, a bark a lot used in cosmetics for its rejuvenating properties. Mulateiro ash gives strength to the medicine.

– Ervas ( herbal mix ): The kaxinawa use a lot of different herbs in their blends, this one made with particular herbs of their use, herbs used for spiritual clearing in ceremonies, like defamation or baths. Also containing a herb known by them to be good for headaches. They didn’t want to reveal the name of the ingredients but is made by knowledgeable medicine people, very traditional in it’s preparation.

– Cacau ( Cocoa ): Another typical Kaxinawa preparation with ashes of wild native Cacao trees and Cacao seeds blended in as well.

– Cumaru trevo: A typical blend made by the medicine man of the Kuntanwa people, his personal favourite. A beautifully scented herb that gives focus and strength to the medicine, another one that is great for lifting the spirits, very effective when down, or going to a strong process in ceremony.

– Apuxury: A nice smelling herb good for headaches, like strong pressure on the eyeballs. Great medicine for Rapé.

– Lemon Grass :Although not traditionally from the region it is made by the Kuntanawa and is a winner this blend.

– Rapé do onça ( jaguar snuff ): A famous Rapé made by the number one Rapé máster of the Nukini people, simple, Strong and beautiful, satisfaction guaranteed.

– Sansara: a wonderful medicine for Rapé blending, this one has also Anador mixed in a natural analgesic from the amazon. This Rapé is made by a woman giving it a feminine touch, although this doesn’t mean it is less trong. Warrior women of the forest.

– Marachimbé: A mixture of different medicines to bring one to their senses, Strong tobacco, a powerful medicine.

– Pixury : A typical blend locally recognized.liked and respected from the Puyanawa people, made by a medicine man of the tribe.
Indigenous Tribe Katukina :

– Tsunu forte: The katukinas where the first tribe of the region to travel out of the area bringing Kambo to the world, they also were one of the first to spread Rapé around. A nice basic Tsunu blend made by a Rapé and kambo specialist from the tribe.

– Awiry : The famous green Rapé of the Apurinan people. This is a diferente medicine that only uses one locally harvested plant from the forest, the so called Awiry. It is tobacco free because it doesn’t use normal fermented tobacco but people say Awiry is a wild tobacco form the forest. This Rapé doesn’t use any ashes.

The tribal eye drops of the region. Great medicine for clearing the vision, cleaning the eyes. In the forest they say it helps for many eye problems, some quite serious ones, research is being done by laboratories. Clears the physical and spiritual vision, used in the forest before going hunting to strengthen the sight.

Non indigenous :
These rapé products are made by our master rapé maker, he gained the knowledge and secrets with the shamans and rape másters and makers of the tribes above, and he mix his own formulas, all made with original raw material provided by the tribes and sustainably made.

– Imburana/ Cumaru de Cheiro
Cumaru is a hard wood tree of which the seeds have traditionally used to flavor Rapé, Cigars and also in deserts. It has a delicate sweet flavour that reminds of vanilla, although very specific own smell. As a medicine used for the respiratory system.

– Parica: An extra strong Rapé, probably as strong as you wil get. Made with a very potent tobacco and ashes of Parica, locally also known as Xixa, an ash that gives a lot of strength to the medicine and is pleasant on the nose.

– Moi Tsunu: A beautiful mild Rapé using local organic tobacco from the Jurua region with ashes of Tsunu, the traditional ash of the Yawanawa tribe, famous for their excelente medicine.

– Mentolado: A nice Rapé infused with Menthol to freshen the respiratory system, opening the channels, a perfect blend, not too Strong to be overwhelming, but Strong enough to refresh.

– Lourinho: A traditional medicine form the region used by different tribes,very refreshing, lifting the spirit, great in combination with other medicines in ceremony, guaranteed to lift you up when needed. A medicine also used for spiritual baths.