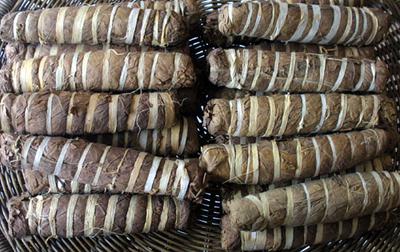 Smoke plays a very important role in the world of shamanism, and as a medicine in itself.  Shipibos generally have used smoke therapeutically since the most ancient times to treat different types of disease, or dis-ease;  tobacco smoke;  smoke from the dried leaves of the ‘achiote’ (annatto), a small indigenous tree with aromatic, red flowers;  smoke of the ‘comején’, or Amazonian termite, obtained by burning their nests;  or smoke obtained from dried palm-leaves – which are traditionally used, also, as the principal roofing material – and likewise, the smoke of burning cotton, cows’ horns, ‘palo santo’ (the sacred tree), or of the copal tree (also known as the ‘locust tree’) – amongst other materials, depending on the spiritual needs of the participants in any given ceremony.

In each and every shamanic ceremony, mapacho smoke plays a crucial role.  Amazonian shamans may specialise in treating patients with ayahuasca, with San Pedro (huachuma), with toé, or with a combination of sacred plant medicines, but in every case the use of mapacho is considered essential, whilst ‘tabaqueros’ – shamans who utilise exclusively the healing properties of mapacho, are highly respected.

Mapacho, the natural local tobacco unique to the Amazon, is one of the minority of the estimated 100,000 plant species of the region which, in western terms, has been classified:  its Latin name is nicotiana rustica.  It contains up to 18% nicotine and no tar.  Nicotiniana tobacum, a variety of which is used in the production of all commercial cigarettes, contains just 1% nicotine and around 30% tar:  all smoking-related diseases have been ascribed to the action of carcinogenic tars or the plethora of chemical additives used in western cigarette production;  the physiological action of nicotine is well understood and is focused in the brain, where nicotinic receptors are formed, accounting for its addictive nature.  But there is no evidence that nicotine is itself damaging and the shamans insist upon its therapeutic and spiritual properties.  Ingested in large quantities, it induces a state of profound trance – something not possible with western tobacco, with its relatively low nicotine content.

Mapacho smoke is important both for the shaman and for the participant in any shamanic ceremony:  first, mapacho smoke is blown throughout and around the space or area in which it is to be performed in order to deter bad spirits from approaching.  The shaman will then blow mapacho smoke over the head, hands and the whole body of each participant which helps to cleanse the negative energy from his or system and finally, it is important that each participant does the same, blowing mapacho smoke over his or her own body and immediate surroundings, using a mapacho cigarette specially ‘icaro’d’ or blessed by the shaman.  As well as keeping evil spirits away, this procedure positively attracts the good spirits, who, the shamans insist, have an almost insatiable desire for mapacho.

Mapacho smoke is also used by the shaman to visualise, or interpret, messages from the mother of tobacco:  by studying the different patterns, or symbols, which form in the smoke which he exhales with specific intention;  this is one more way in which the shaman receives information from the spirits, generally concerning, in this case, the diagnosis of his patients.

In ancient times, the Merayas [?] used these various types of smoke ritualistically to purify the body, mind and spirit of their patients or dieters [?].  Such rituals were also used by the Merayas to purify their own spirits so that they could travel through cosmic space, or other dimensions and also, for example, to make themselves invisible.

In Ashi Meraya, smoke rituals are practised for the spiritual purification of all and to help in the extraction of negative energies either internal (perhaps caused by repeated bad thought patterns) or external (possibly absorbed by a rival, or even a partner).  These rituals complement any treatment with the principal plants such as ayahuasca, San Pedro or tobacco.