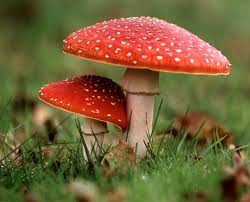 The fly agaric is an attractive, vibrantly coloured toadstool, which is familiar and instantly recognisable (3). It has a bright red cap, which fades to an orange or orange-yellowish colour with age. The fluffy white spots on the cap often take on a yellowish tinge as they grow old, and may occasionally be washed away by rain (4). The stem has a bulbous base, and tapers towards the cap (3). This fungus is dangerously poisonous and should NEVER be tasted (2). The name fly agaric derives from the fact that since medieval times it was commonly used as a fly killer, broken up in milk or sprinkled with sugar (3). Read More

Fungi are neither plants nor animals but belong to their own kingdom. They are unable to produce their own food through the process of photosynthesis, as plants do; instead, they acquire nutrients from living or dead plants, animals, or other fungi, as animals do. In many larger fungi (lichens excepted) the only visible parts are the fruit bodies, which arise from a largely unseen network of threads called ‘hyphae’. These hyphae permeate the fungus’s food source, which may be soil, leaf litter, rotten wood, dung, and so on, depending on the species(4).

The fly agaric is found from August to November in Europe, and from June to October in North America (3). It grows solitarily or in scattered groups (2). Fly agaric is eaten by reindeers, and is associated with Christmas in many parts of Europe. It has even been suggested that the use of fly agaric in midwinter festivals in Siberia may have been the inspiration for some of the features of Santa Clause, including his red and white robes, use of chimneys and his association with flying reindeer (5).

This widespread toadstool occurs in Europe and North America. It was introduced to Australia, South Africa and New Zealand with pine trees imported from Europe (3).

Previous article
Other Stores
Next article
Who is NaturalEther?
Leave a Reply