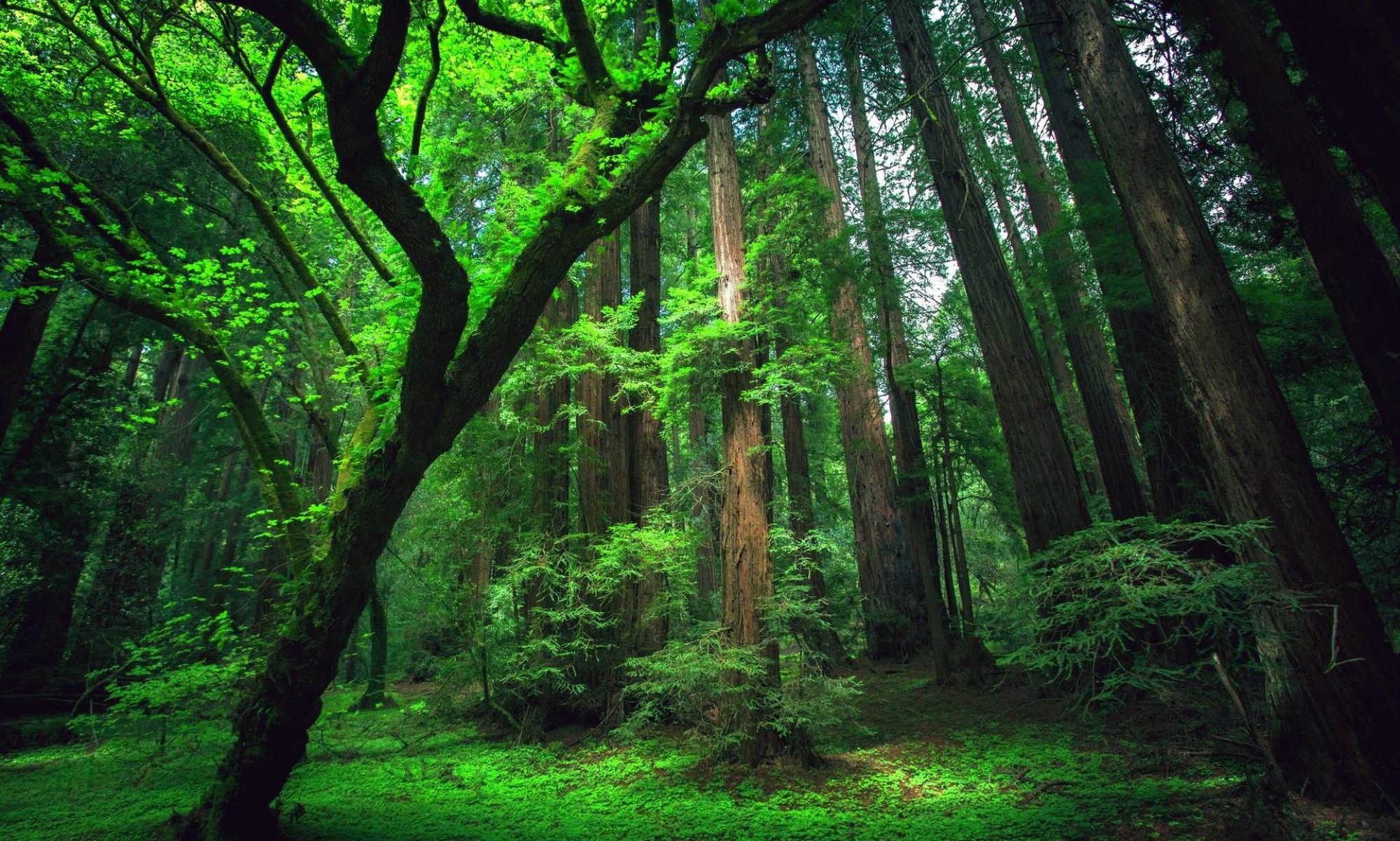 Home to over half the planet’s plant and animal species, the most extensive rainforests in the world absorb vast amounts of carbon dioxide from the atmosphere, helping maintain the balance of the air we breathe while simultaneously playing a critical role in curbing global warming.

Rainforest can be described as a tall, dense jungle. The reason it is called a “rainforest” is because of the high amount of rainfall it gets per year. Around 40-75% of all biotic species are indigenous to the rainforests. There may be millions of species of plants, insects, and microorganisms that are still waiting to be discovered in a tropical rainforest. There are tons of benefits these rainforest can provide such as stabilizing world climate, providing a home to various plants and animals, a good source of medicine and food, it protects us from flood, drought and erosion and a lot more. So on that note, in this article we will showcase ten breathtaking and awe-inspiring rainforests in the world.

The legendary Amazon is a place of superlatives and it represents over half of the planet’s remaining rainforests. It is the largest, nearly a third of all the rainforest in the world and the most diverse one. Sweeping out from the world’s largest river through nine different nations. The forest is estimated to be shrouded by 390 billion individual trees divided into 16,000 species. Some of the species found in this region include 2.5 million insects, about 2,000 mammals & birds, and tens of thousands of plants. To date, an estimated 438,000 species of plants of economic and social interest have been registered in the region, with many more remaining to be discovered.

However, this expansive wilderness is under relentless threat from large-scale farming and ranching, development, logging, mining, and climate change. With the majority (60%) of the Amazon within Brazil, the country shoulders tremendous responsibility.

Spreading across six countries, the Congolese Rainforest is the second biggest rainforest in the world. It is also widely acknowledged for its high levels of biodiversity, characterized by more than 600 tree species and 10,000 animal species. A medley of rivers, forests, savannah, swamp, and flooded woodland, the basin teems with life: gorillas, elephants, and buffaloes all call the region home.

Since 1990, Central Africa’s deforestation rate has been the lowest of any significant forest region in the world. And over the past 20 years, deforestation in the Congo has often been from small-scale subsistence agriculture, clearing for charcoal and fuelwood, urban expansion, and mining.

The rainforest is named after Valdivia, in Southern Chile and named after the city’s founder Pedro de Valdivia. Known as the rainforest at the end of the world, the world’s southernmost jungle of this kind, Selva Valdiviana (Valdivian Temperate Forest) is located on the west coast of southern South America.

The forest is renowned for its endemic plants and 150-foot tall trees in addition to rare species of animals. Some of the old tree species are Alerce and Olivillo. Angiosperm trees, bamboos, ferns, conifer trees, narrow coastal strips, ice sheets, glaciers, and a central valley highlight the forest. The temperature here is usually humid due to heavy rain. It is typically very foggy.

Dangers to the Valdivian include expansive logging and the replacement of the indigenous trees by faster-growing pines and eucalyptus, which are more sought-after in the pulp and paper industries.

The Daintree tropical rainforest is located on the northeast coast of Queensland in Australia named after Richard Daintree. It is part of the world’s oldest continually surviving tropical rainforest. It is assumed to be 6-10 times older than those seen in the protected areas of the Amazon – having stood for 150 million years. The area between Bloomfield River and Mossman Gorge is entirely covered by the forest and also has the Daintree National Park. Its main river is the Daintree River.

The ecosystems of the Daintree Rainforest are some of the most complexes on Earth. Its plant diversity and structural sophistication are unrivaled on the dry Australian continent. The forest is a dwelling to some of the earliest plants on Earth, such as the Lycopsida and Psilotopsida. It holds the highest number of animals and plant species that are very rare to find.

Unfortunately, the UNESCO-protected area does not expand to all of the Daintree with residential development, climate change, and intrusive plants and species all a hazard.

Spreading over 4,000km in a narrow coastal passage from the edge of Prince William Sound in Alaska, along coastal British Columbia in Canada, through the northwestern US states of Oregon and Washington to northern California, the Pacific Coastal Temperate Rainforest denotes the largest area of coastal temperate rainforest in the world. Despite its incredible span, the forest is only 150km wide at its broadest.

Its Ecoregions are mostly comprised of conifers. Redwoods trees dominate the southern limit in northern California and they are the tallest, biggest, and longest-living trees on Earth. It includes the Tongass National Forest in Southeast Alaska, the USA’s largest national forest, as well as Canada’s Great Bear Rainforest in British Columbia, which is home to the spirit bear, the rare white variant of the black bear.

In Tongass, logging is a guileless danger. Logging and road-building in America’s premier temperate rainforest are continuously increasing.

New Guinea’s rainforest covers around 65% of the entire land area. It is the second-largest island in the world and is home to one of the last grand stretches of tropical rainforest as well as some of the world’s most traditional forest inhabitants, some of whom have had little or no contact with the outside world.

This rainforest is among those with the most myriad and uncommon animal and plant species on Earth because of its dense mangrove trees. It is shared between two countries – Indonesia provinces of West Irian Jaya and Papua to the west and Papua New Guinea on the eastern side.

The Tropical Rainforest of Sumatra is situated in the middle of the island of Sumatra, Indonesia, and consists of three national parks; Gunung Leuser National Park, Kerinci Seblat National Park, and Bukit Barisan Selatan National Park. The area harbors the greatest potential for long-term conservation of the distinctive and various biota of Sumatra, including numerous endangered species. The area is home to an estimated 10,000 plant species, including 17 endemic genera.

However, the Sumatran rainforest is a profoundly woeful anecdote of deforestation. The sixth-largest island in the world was once shrouded with thick jungle from coast to coast. Now, only pockets of rainforest remain, largely within the UNESCO-protected Tropical Rainforest Heritage of Sumatra. Palm oil production and illegal logging are primarily to blame. With almost 50% of Sumatra’s tropical rainforest gone in the last 35 years, the probability is that beyond these shielded areas all remaining rainforests in Sumatra will disappear within 20 years.

Reaching from central coastal New South Wales into southeast Queensland, the Eastern Australian Temperate Forests ecoregion surrounds an extensive assortment of substrates, microclimates, and vegetation communities. This wetter coastal ecoregion has acted as a sanctuary for wet forest species for millions of years and many endemic and relictual species appear here.

However, logging of native eucalypt forests, coastal development, and drastic and across-the-board bushfires driven by global heating pose major threats to the ecoregion. Water pollution and schemes for water use are also threats. Nearshore expansion in New South Wales has considerably amplified over the last 20 years, and almost the whole coastline is populated. The same thing is happening in southeastern Queensland where coastal development has resumed at an equivalent pace, with all coastal lowland vegetation impacted by instantaneous urban expansion.

Nicaragua’s Bosawás Biosphere Reserve sits within the Mosquitia region that straddles the border of Honduras with Nicaragua. It comprises around 5% of Nicaragua’s total land area making it one of the largest contiguous rainforest regions in Latin America north of the Amazon Basin. It includes 21 ecosystems and six types of forest that are home to a multitude of species, several of which are threatened with extinction. the Bosawás Biosphere Reserve has been a UNESCO biosphere reserve since 1997.

According to reports, a little more than 15% of the Bosawás reserve had been cleared and converted for agricultural use in 2000. But today, that number reaches nearly 31%. Satellite data show deforestation reached the heart of the reserve’s core zone earlier this year. The leading threat comes from Nicaragua’s booming livestock industry. Ranchers have migrated to the reserve en masse where they often pay land traffickers to illegally secure title to land.

Approximately 22 million hectares of rain forests, known as the Heart of Borneo, comprise about a third of Asia’s largest island. It has an area the size of Utah in the US, Victoria in Australia, or the whole of England and Scotland put together and extending into the territory of the countries of Brunei Darussalam, Indonesia, and Malaysia, it is one of the largest transboundary rainforests remaining in the world.

It is estimated to be around 140 million years old, making it one of the oldest rainforests in the world. Roughly about 12 million people, including indigenous groups, rely on the Heart of Borneo not just for clean air but also for food, medicine, and livelihood. These and other equatorial forests function as the “lungs of the earth,” drawing in carbon dioxide from the atmosphere and breathing out oxygen.

However, logging, land clearing, and conversion activities are considered to be the greatest threats to the Heart of Borneo. Of particular concern is the conversion of natural forests to oil palm and timber plantations.

Rainforests constitute some of the planet’s most vital ecosystems and environments. It is home to millions of different species where some are not yet even discovered. Unfortunately, the world’s rainforests are rapidly vanishing at a rate of 6000 acres every hour (this is about 4000 football fields per hour). When these forests are cut down, the plants and animals that live in the forests are killed, and some species are at risk of being made extinct. In addition, as the large-scale harvesting of lumber from the rainforests persists, the balance of the earth’s ecosystem is disrupted.

The consequences of deforestation are undeniably felt by every living inhabitant of this planet. However, forests can be managed effectively without endangering rare species of plants and animals and without risking global environmental damage. Companies that gather timber should not be allowed to “clear cut” large areas of forest and should be required to plant new trees after they cut trees down. Nations and their government should create large parks and reserves where hunting and logging are not allowed. As a world community, we must be careful not to destroy the resources that people will need in the future. We need to support groups that are continuously fighting to solve environmental challenges and fervently building economic opportunities for the indigenous people. As the native American proverb goes, “we don’t inherit the earth from our ancestors, we borrow it from our children”. Save our rainforests. Save mother earth. Save our future.